All cards for the MONTHLY SUPERSHOWS for 2019 can be found here, whether they're gimmick-based shows, the end of tournaments, or even milestone celebrations!
Post Reply
1 post • Page 1 of 1

The biggest event in professional wrestling is here! Twenty Years of Immortality all come down to this! It's...

Simulcast on The Xperience & Battleground Network
LIVE! From Etihad Stadium in Manchester, England (55,000 Capacity)
Theme Songs: "Live Forever" by Oasis and "Galvanize" by The Chemical Brothers 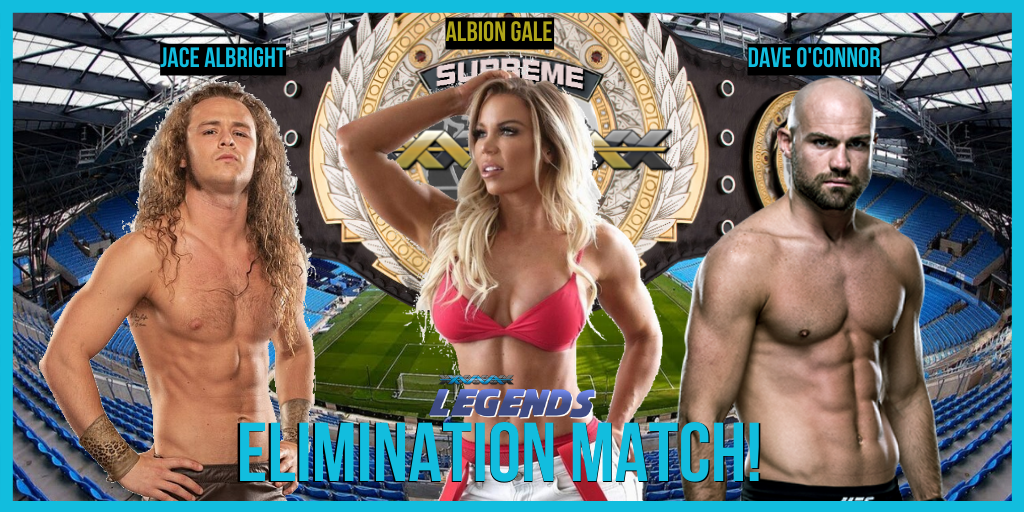 Albion Gale entered 2019 with the XWA Lord of the Ring on her finger and one simple goal: don't let them think last year was a fluke. Needless to say, the Duality of Woman didn't come close to a sophomore slump; she won the World Television Championship at XWA's China Anniversary, defended it through the spring, and just four days after dropping that title, she walked into The XWA 500, made Danny Diamond submit, and became the 11th Supreme XWA Champion in her home state of Indiana. But now, in her third defense, she faces the two people who've chased her the hardest in a match that will decide the course of XWA's future as we head into a new decade.

In one corner, we have Jace Albright, who started the year as the official One to Watch and proceeded to prove he deserved that title by racking up victory after victory over big names like Joey Miles and A.J. Morales, but found himself frustrated as others cut the line to Supremacy every time he reached the top of the XWA Top Ten until finally getting his shot here as the rightful #1 contender. In the other, we have Dave O'Connor, the man who took the Television title from Albion, and who she defeated in her first Supremacy defense, only for him to crash the second and end XWA On A Boat by sending both her and himself plummeting into the depths of the Caribbean Sea. Even though Dave was supposed to be out of the title picture, Gale was so furious at his actions that she demanded a chance to get even here at Legends XX and win the all-important rubber match at any cost.

And so, XWA owner Bella Quinn booked a compromise: Gale, Albright, and O'Connor, the three biggest homegrown stars to emerge since Team XWA buried the Survivors and Quinn took sole ownership of the company in December 2017, will battle inside the iconic Etihad Stadium until two are eliminated and one reigns Supreme, not just over their generation, or even the BattleZone, but the entire pro wrestling world. Will the Duality of Woman prove too strong for both her challengers to handle? Will the Starlight finally shine as bright as the fans believe he can? Or will the Maniac end up running the asylum? Twenty Years of Immortality have led up to this very moment. Whether you're watching on the Xperience or the Battleground Network, this is a main event you NEED to see! 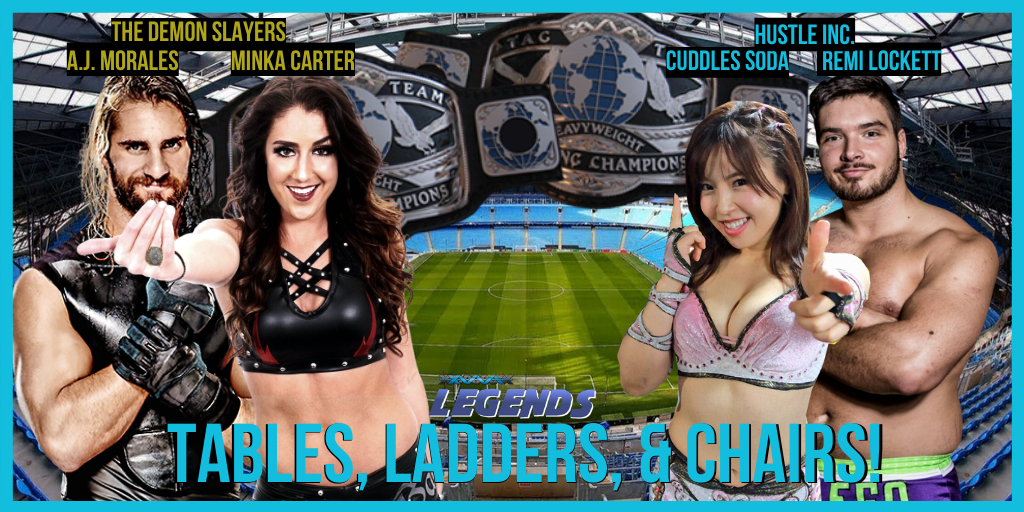 Last year, the XWA World Tag Team Championships weren't even defended at Legends, as the main event saw the two fallen-out co-champions, Lx-Tim and Mark Storey, fight each other for Supremacy. This time, Bella Quinn wants to make sure the titles get the platform they deserve here at Legends XX, and lucky for her, there's some unfinished business in this division that needs settling. As soon as the Demon Slayers, A.J. Morales and Lord of the Ring winner Minka Carter, made their improbable turn from arch-enemies to World Tag Team Champions, they became the favorite targets of upstart tag team Hustle Inc., who, over the course of the summer, gave Minka nagging leg injuries she'd have to fight with all the way to winning the 2019 XWA Lord of the Ring Summer Tournament, cost A.J. the Hardcore Championship, and generally acted as thorns in the champs' sides. At XWA Gold Rush in August, it seemed like the situation would finally be settled, as the Demon Slayers defended their titles for the first time against Ryoko and Remi, only for the challengers to deliberately get themselves disqualified in pursuit of a statement beatdown. Needless to say, the champs were not happy with that result, and the war was nowhere near over, so this time, Hustle Inc. will have to rise to a bigger challenge.

Did I say "rise"? I meant "climb." Because we're gonna be hanging those World Tag title belts fifteen feet above the ring, and these two teams will have to use however many tables, ladders, and chairs it takes to destroy the competition and take down those belts. Will the Demon Slayers finally pull out the thorn that's been stuck in their side since June? Or will Melvin Hustle's desperate bet on a delinquent waitress and a washed-up hockey prospect finally pay off? Call it America versus Canada or big names versus up-and-comers--however you slice it, this TLC match will headline Legends XX, and whoever wins it will reign high above the rest of the tag team divison! 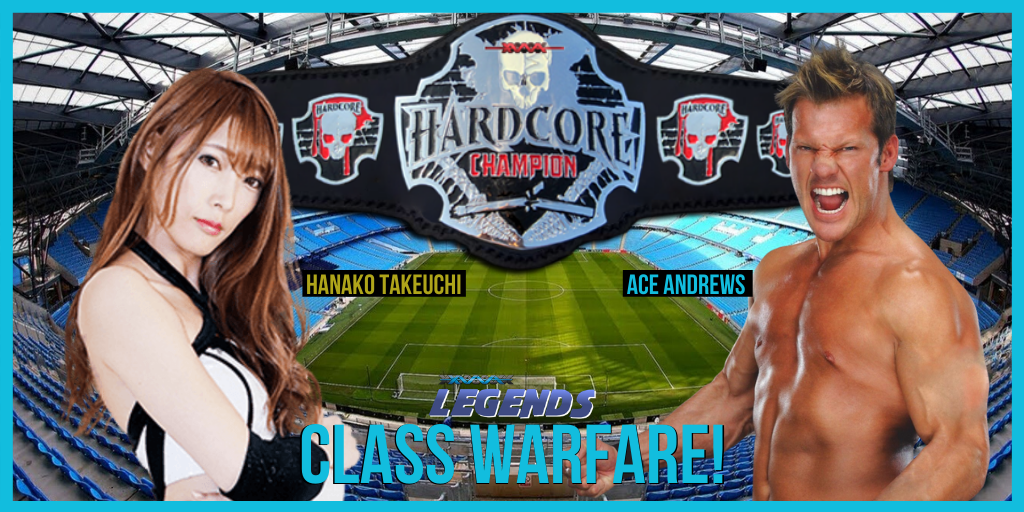 Hanako Takeuchi entered XWA's home stretch with a bit of an interesting situation on her hands. As both the Hardcore and World Television Champion, not to mention an international star in her own right, the Black Rose had a certain degree of liberty as to which belt she would defend at Legends XX--and she came to the front office with a very specific vision. She came to XWA as an outsider, representing Death Trip Wrestling and Union Grand Prix, but by winning her titles and making it to the finals of the Lord of the Ring Summer Tournament, she's made herself more and more of a BattleZone cornerstone--and now, she wants to solidify that status by defending the Hardcore Championship against former XWA co-owner Ace Andrews. The last time Andrews was in a match for this title two years ago, he took the fall that not only denied him the gold, but buried the Survivors and cost him his ownership stake in the company. He may have redeemed himself in the eyes of the fans since those days, but winning the belt here would almost certainly help him vanquish the shadow of that night from his mind.

It's the Billionaire Brawler versus Osaka's most famous street punk, a super-rich challenger and an underclass champion, and with Hardcore 24/7 rules in effect, this fight could take these two anywhere in the stadium, maybe even out of it completely, and any number of falls to truly decide the winner--and that's without anybody else going into business for themselves and joining the match. This could be the most chaotic match of the whole night--who will end up on top of the Hardcore heap? 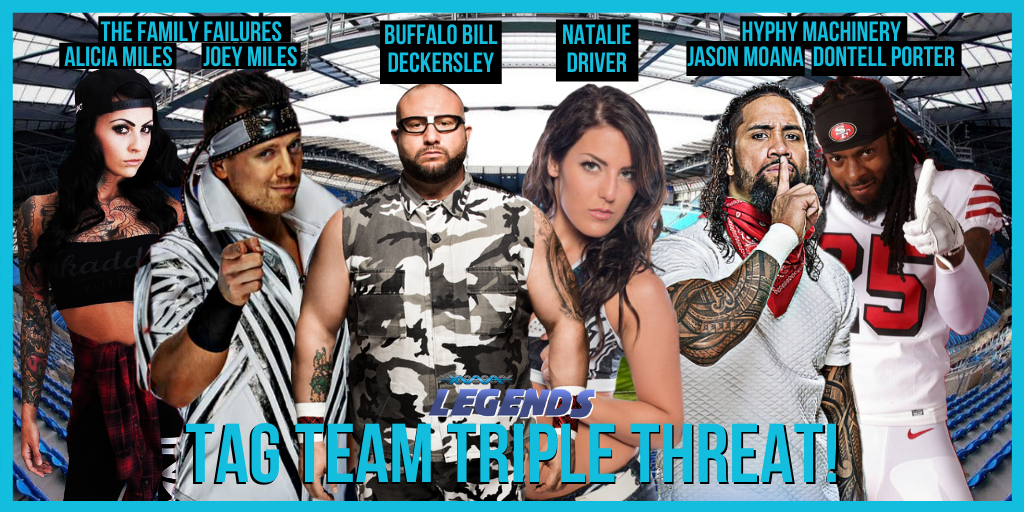 After spending most of 2019 in the fans' good graces, Joey Miles has gone back to his old ways. In the main event of the final XWA Massacre of the year, after he made former 2-time Supreme XWA Champion Jerod Barnez tap out in a tag team match, Miles kicked Kaida Kagome, his tag partner and co-World Tag Team Champion for the first third of the year, to the curb. And if that wasn't enough, he dropped a bombshell at XWA On A Boat when he revealed that Bloody Mary, Danny Diamond's protege, was in fact his older sister, Alicia Miles. Unchained from the people they feel held them back, the siblings have branded themselves the Family Failures, and at Legends XX, they'll get the biggest possible stage to drag the competition, and their own family name, through the mud. Their first test comes against the unlikely pair of Buffalo Bill Deckersley, the table-smashing King of the Tailgaters, and Natalie Driver, the biggest blue chip prospect Japan's EMPIRE Wrestling Federation has seen in years. Driver earned an early graduation from the Dojo this September by fighting EMPIRE's 254 TV Champion to a time-limit draw, and by sending her on an excursion to XWA, EMPIRE hopes to forge their next franchise player in the fires of the BattleZone, starting right here tonight.

At least, that was the plan until THEY called. It seems Hyphy Machinery, after spending most of the year focused on their business ventures, are making their big return tonight, and they hit up the front office at just the right time to get themselves added to the mix, making this a triple threat and adding a much more experienced, scarily-synchronized team to the fray--not to mention a very tempting set of tag titles they brought from down South...

Tfree teams will take the pitch, two of them for the first time. Six wrestlers with completely different styles will collide. Will a strong defense and aerial attack bring the Family Failures a statement victory? Will strikes and slams secure Driver and Deckersley an unlikely first win? Or will experience and superior tactics guide Hyphy Machinery to a big win on their return to the BattleZone? Either way, the future of our tag team division might start to take shape here... 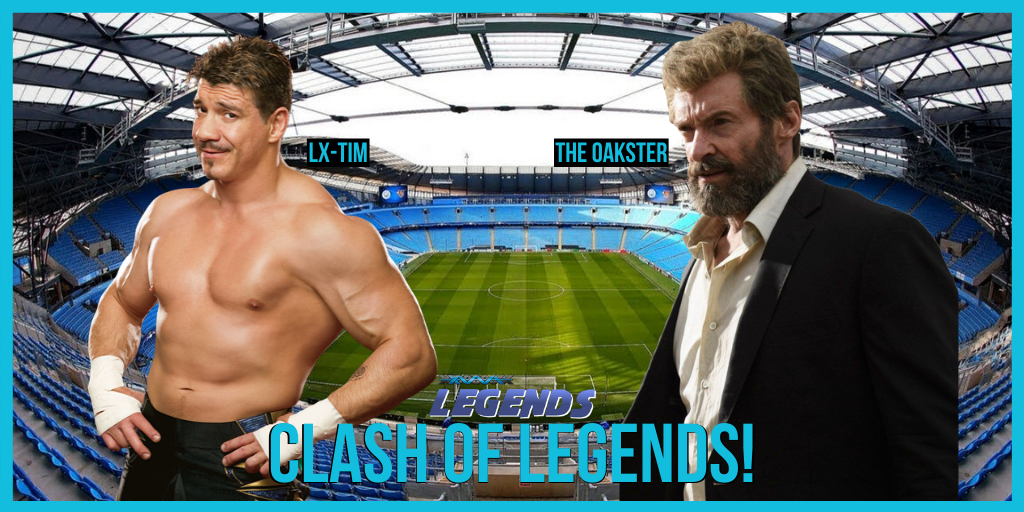 It's only fitting that, on a night that honors our long and storied past, we begin with two of the most decorated legends of our sport. Lx-Tim put the world on notice by returning from the injured list, answering his cousin Grandeza's open challenge at XWA On A Boat, and declaring that he was back in the hunt for the Supreme XWA Championship that he never lost. The History Maker won't get his rematch here tonight--in fact, this is his first Legends match ever without a title on the line--but the man who, perhaps more than anyone else, defined XWA in the late 2010's will set the tone for Legends XX and get a chance to make his case for a shot at Supremacy. In order to do that, though, he'll have to topple one of the greatest wrestling giants Britain has ever seen: The Oakster. The Blood Red Sandman entered this year's XWA 2019 Lord of the Ring Summer Tournament and defeated Hanako Takeuchi in the opening round, only for her to win the second-chance draw alongside Dave O'Connor and put Oakster through a table en route to victory. After taking his time to heal back up from that, the Keeper of Yesteryears is back, and he knows a win this big in front of his countrymen would instantly put him in title contention.

These two are multiple-time world champions, they're Hall of Famers, they've fought the best of the best around the world, but never before have the Extreme and the Latin Extremist collided...until tonight. Don't miss this dream match!

Bella Quinn is aiming high for next year--find out where XWA's headed in 2020!