Profiles for ALL singles members of the current Active Roster, as well as Enhancement Talent can be found here! You will also find threads for Taken Pic-Bases, Entrance Music and Posers (avatar images for wrestlers).
Post Reply
1 post • Page 1 of 1 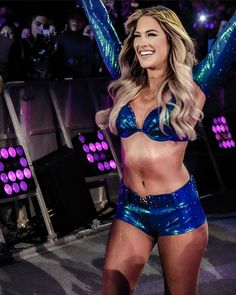 As the lights dim as purple and pink lights began to fill the arena, ‘CrushCrushCrush’ Blasts over the PA System, the crowd erupts into cheers as The Starstrukk Princess walks out from the black curtain, making her way to the centre of the stage, raising her hand towards the ceiling of the arena with a smile on her lips. Making her way down the ramp, as she reaches over tagging a few of the fans hands on the right side. Then doing the same on the left hand side, getting to the bottom of the ramp, moving around ringside as she hopes onto the apron.

BIOGRAPHY
Caitlynn Ali Lea, Born 10th March 1991. Born and Raised in Miami, Florida; Better known as Talia Lea who had done everything in her past from Gymnastics to Cheerleading to anything that puts herself out there. She lost her mom at a young age which then lead her to being raised by her dad and older brother. She had watched wrestling from a young age and later in life she finally tried out and accomplished her dream of becoming a superstar.

In 2011, Talia had signed up to XWA (Association) and had accomplished a lot in her career there and becoming the first ever Unified Women's Champion. She also dated A former XWA Superstar during those times her life couldn't get any better. It pretty much got worse there on out and was out of action for sometime due to her match that involved Ace Andrews who was defending the World Heavyweight Championship against her in a No Disqualifications Match which later on in that match he had snapped her arm and she was out of action which lead her to retire.

She had then had a dark place in her life when she lost her daughter; her fiance and her world was just swept from underneath her. During that time she went into a deep depression and things seemed to have gotten to her a whole lot more which led her to faking her own death. In Late 2016 Talia had revealed that she was in fact in hiding and now she is back after taking some time away.