You might think it all ends when the last bell rings, but not in the XWA! This is your first stop to post promos, interviews and character development featuring our stars that is NOT for a current show.
Post Reply
1 post • Page 1 of 1

”Update on David Michaels”
Online Exclusive | Backstage, not far from Gorilla position | A few minutes after Massacre #61 has gone off the air
written by DaveyBoy32

The following is an online exclusive video.

Massacre #61 has officially gone off the air about five minutes prior, with the last image being that of Razor Xtreme standing over a bloody David Michaels. The scene was that brutal, even the commentary team struggled to call the final moments. A few decolourized shots of the incident are shown at the start of the video, as we hear a doctor in the background talking to someone, asking them if they are OK.

The video package then transitions to the backstage area, not far past the Gorilla position, where we see David Michaels sat up on a steel chair, leaning over, breathing very heavily. His head is stained in his own blood, with his hair now completely red and half dried. The XWA Doctor is sitting beside him on another steel chair, preparing a fresh towel after putting on a new set of disposable gloves. Michaels then sits up and we see his face, fully, for the first time. It’s not a pretty site at all and he looks visibly confused, as he slowly turns his head to his left and looks at the doctor with a semi-distant look in his eyes.

Looking at the Doctor, David shakes his head slowly, before looking back down at the floor, feeling sick.

| XWA Doctor
”Do you know when you were born, David?”

He looks back up at the Doctor, sort of realising what is going on here.

| David Michaels
”...errmmm...Octember? Wait...Christ my head, what the hell happened?”

| XWA Doctor
”You got hurt pretty bad out there, buddy. You’re cut open.”

David then touches his head with his right hand, as the Doctor presses the fresh towel against the large gash in the top of his skull. David then looks at the blood on his hand, before he fully notices his chest and stomach looking like something out of a horror film. He panics a little, looking at the Doctor, who reassures him to just remain calm.

| XWA Doctor
”It’s OK buddy, just try and remain calm for me. You got beaten up pretty bad and you’ve taken a pretty nasty cut to your head. You’re gonna’ need that stitched up. Let's get you to the trainer’s room so I can patch you up. Hold this.”

The Doctor then gets David's left hand and places it on the towel, making him hold it against the cut that is still weeping some blood. He walks around the other side of David and helps him up, holding his arm over his shoulder and the pair make their way to the trainer’s area.

The video then cuts to David Michaels in the trainer’s room, who is sitting on the bed/table, looking at the blood stained towel he was holding on his head. He has gone very quiet, legitimately trying to remember what happened to cause all this. At no point does it cross his mind that this is all the handy work of Razor Xtreme.

The Doctor then begins patching him up, cleaning up the cut and begins putting in the stitches. David appears to be responding a lot better to him now, but still can’t remember what happened.

A knock at the door is then heard, before David’s running buddy, Carnage, walks into the room. Known for being a very jolly ‘giant’, he doesn’t appear to be in the best of moods and is rather sombre himself.

Carnage, however, does remember what happened.

He pulls up a steel chair next to the table/bed David is sitting on and slaps his right hand on David’s left calf with David looking at him in the corner of his eye, bringing a smile to his face. He remembers who Carnage is, at least, so that’s good. Carnage takes a big gulp of water from a bottle he was holding and passes it to David, taking a swig himself. The taste of something pure being very refreshing for the pair. David then slowly turns his head to the left, trying not to unfocus the Doctor, and looks at Carnage. Maybe he knows what happened.

| David Michaels
”You good man? You look a little rough.”

| Carnage
”Well you’re not looking too great yourself then, pal!”

David gives off a little chuckle, Carnage always one to bring some comedy, no matter the situation. He was being serious, though, as Carnage keeps holding his abdomen from that Spear he took at the hands of Maddox Paine.

| David Michaels
”What's wrong with your stomach? Eat something bad?”

Carnage looks at his pal, wondering if he’s playing some strange joke he isn’t getting. Then he realises David has no clue what just happened. He was wondering why he was so calm, gash in his head and all.

| David Michaels
”No idea about what?”

| David Michaels
”Not exactly. I remember...ermmm...I had a match...against Storey? I think I won...I was holding up the belt. I celebrated with you? Yeah, I think I did...did I fall over on the steps or something? Don’t tell me Storey attacked me?!”

Carnage shakes his head, as he screws the plastic lid back on the water bottle.

| Carnage
”No, no you didn’t fall over...well, not from your own doing anyway. You did have a match against Mark Storey, a pretty good one at that. You won, by the way, if you don’t remember.”

| David Michaels
”...well that explains me holding up the belt, at least. But how did I end up with a gash the size of a trouser pocket on my head?!”

Carnage takes a deep breath, not entirely sure if he should let him know. Even the XWA Doctor is shaking his head. David can sense something isn’t right here; he can accept he’d be a clumsy idiot and somehow manage to do this to himself. Hell, he appeared to even accept Mark Storey could have done this. I mean, at least they were in a match together. But now he’s really wondering what happened.

| David Michaels
”OK, dude, what’s wrong? What the hell happened for me to be like this? Just tell me, man...”

| Carnage
”Alright, alright, but you need to remain calm. You’re clearly in no state to be getting worked up!”

| David Michaels
”...you waiting for a cab or summit’? Just out with it already!”

David suddenly leaps up from the table, accidentally knocking the XWA Doctor back a few steps, tossing his towel into the wall opposite.

| Carnage
”Dude, just chill! Let me get you some Tylenol real qui---”

| David Michaels
”I DON’T WANT ANY DAMN TYLENOL! I’M GOING TO RIP HIS FUCKING HEAD OFF!”

Everything suddenly comes flooding back to David all at once, his head and eyes moving around in little movements, almost like a scene from a movie. Carnage being Speared...a chair shot to the back...a crack on his skull that gave him the mother of headaches...his back hurting and the feeling of floating in the air...blood everywhere.

Yep, he remembers it all.

The XWA Doctor tries to calm him down, as does Carnage, who forces him to sit back down. David complies, albeit it reluctantly, as Carnage is strong as hell. His face is furious, going bright red behind all the blood stains, his eyes widened in sheer rage. He then suddenly holds his forehead, the sudden rush of blood to it causing something akin to a brain freeze.

| David Michaels
”Dude, I’m asking you right now. The next time I see Razor, don’t hold me back. Don’t try and protect me. I don’t care if I gush another 50 pints of my own blood, I am going to end that bastard’s career at Legends! All I want you to do at that show is find his bitch Maddox...and take him out.”

David then looks a little to the right, noticing the camera stood opposite, as he unwraps some wrist on his right hand. He tosses it to the ground in anger.

| David Michaels
”I’ve had it with you, Razor. All your little antics, not just recently, but throughout your career. You’re a coward and you put on this little act of being a ‘Queen’ in order to cover that up. I’ve kicked your ass in the past and come Legends, I’m going to do it again. You think that you’ve got an advantage over me here tonight? Yeah, congrats. I’ve got a gaping hole in my head that needs stapling shut and you’ve stained Chicago with my blood. But I’ve got until December 24th to recover. I’ve got nearly a whole month to heal and become stronger. The next time we will see each other, it won’t be in Chicago, hell it won’t even be in the United States. We’ll be going to my home of the United Kingdom, my hometown of Manchester to be precise. You’re going to have to walk out in front of 70,000 of my fans...my people. You’re going to have 70,000 people wishing hell upon you and you might think you thrive on that, but trust me buddy, you want no part of this. The gloves are off now. It’s Last Man Standing. I guarantee one of us isn’t walking out of Old Trafford and guess what? It isn’t going to be me.”

David then holds his head again looking down, giving out a sigh of frustration, before looking back at the camera. He leans in a little closer.

| David Michaels
”You’ve just made the biggest mistake of your life; you didn’t kill me.”

David then leans back, before quietly saying to Carnage that he wants the camera gone. Carnage nods his head and gets back up, politely asking the cameraman to leave, who obliges.

As the camera man walks back through the door, Carnage slowly closes it shut, as David Michaels gets properly seen to by the Doctor. 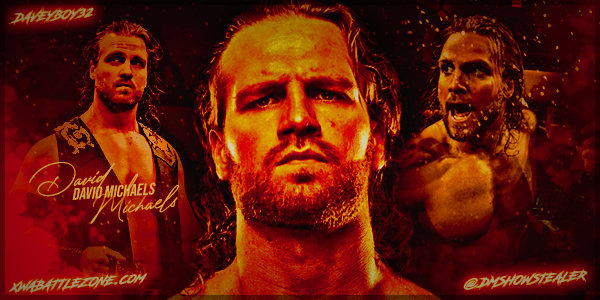 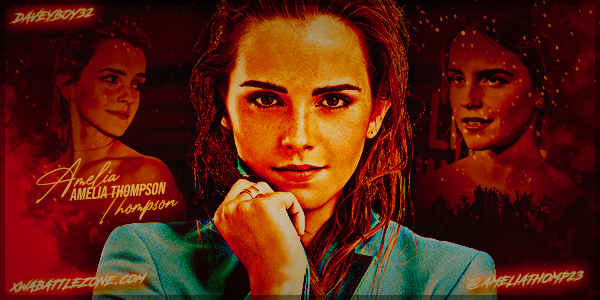 Return to “Beyond the BattleZone”